The human immunodeficiency virus (HIV) is constantly changing, and because medications are being improved, the recommendations for the best ways to treat HIV are being updated regularly.

In April 2015, the US Department of Health & Human Services Panel on Antiretroviral Guidelines for Adults and Adolescents, which works through the Office of AIDS Research Advisory Council, published updated guidelines to include the latest data and research.1 New medications launched in the past year are now included in the guidelines, along with updates regarding which regimens are best for the treatment of HIV infection in adults and adolescents in the United States.

The panel, which consists of 40 voting members with expertise in HIV care and research, based the recommendations in these guidelines on studies published in peer-reviewed journals. However, they noted that on some occasions when new information may affect patient safety, the panel may include unpublished data as evidence to revise the guidelines. Data were rated based on the strength of the recommendation (A, strong; B, moderate; C, optional) and quality of the evidence to support the recommendation (I, ≥1 randomized controlled trials with clinical outcomes and/or validated laboratory end points; II, ≥1 well-designed, nonrandomized trials or observational cohort studies with long-term clinical outcomes; and III, expert opinion).

This year there are 5 recommended regimens with A-I ratings, 6 alternative regimens with BI-III ratings, and 7 other regimens with CI-III ratings. Integrase strand transfer inhibitors (INSTIs) dominate the recommended regimens, along with 1 protease inhibitor–based regimen (Table).1 In addition, the INSTIs have been effective in controlling viral loads with limited toxicity and a minimal amount of drug–drug interactions, according to the panel. The protease inhibitor regimen is less likely than other regimens to lead to drug resistance in this patient population and is used for patients with variable or questionable medication adherence. Two regimens previously classified as recommended are now categorized as alternative. 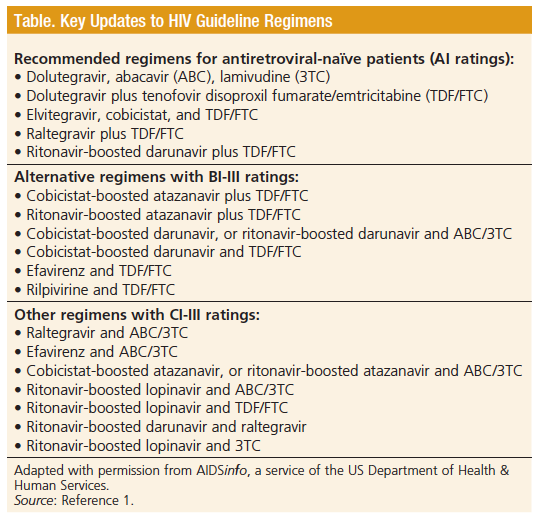 Three new antiretroviral medications recently entered the market. The first is a once-daily, single-tablet, combination product called Triumeq.4 Triumeq was approved in August 2014, and contains dolutegravir, an INSTI, with a backbone of abacavir and lamivudine to complete the full regimen. Based on experience and research on the topic, there seems to be a push for once-daily, single-tablet, full regimens to increase patient adherence and improve outcomes. Limitations for these products include the inability to adjust for specific patient characteristics (eg, poor kidney function or HLA type). In January 2015, 2 medications with the pharmacokinetic booster cobicistat as a part of their formulation were introduced.5-8 Atazanavir and darunavir are now available as combination products containing cobicistat, thus decreasing some of the pill burden and increasing the effects of these protease inhibitors.

The future of HIV antiretrovirals may be shifting from creating new medications to improving those currently available through boosting and combining. Hopefully these innovations, along with the panel’s guideline updates, will help lower the pill burden and improve patient adherence and outcomes.