According to the Pew Research Center, approximately 10,000 baby boomers are turning 65 years old every day.1 This alarming trend has been taking place since January 2011, and is expected to continue at the same rate to the end of 2030.

Consequentially, enrollment in Medicare programs has seen robust growth, and these programs are projected to continue to grow in the next decade.2 For example, between 2005 and 2014, the Centers for Medicare & Medicaid Services (CMS) witnessed a growth of >10 million enrollees in Medicare Advantage. According to a Kaiser Family Foundation analysis of CMS Medicare Advantage enrollment files from 2005 to 2014, and April 2014’s Medicare Baseline, which was published by the Congressional Budget Office, the projected Medicare Advantage enrollment in 2024 is expected to eclipse 25 million lives, representing an increase of almost 450% since 2005.2 Therefore, the healthcare system has, and will continue to observe, unprecedented growth in and responsibilities for providing patient care to the growing population of elderly patients.

To help increase accountability and ensure the quality of care delivered to the increasing Medicare population, CMS established the 5-Star Quality Rating System, wherein health plans offering Medicare Advantage (MA) plans, Prescription Drug Plans (PDPs), and the combination of both plan types (MAPD), were rated on the quality of care and customer service they provided to their members. The ratings range from 1 to 5 stars, with 5 stars representing the highest possible rating.3 These ratings are then prominently displayed during the Medicare open enrollment period each year, to help educate consumers on which plans are offering the highest level of quality care and customer service. In addition to the marketing advantages for those plans that achieved a high star rating, and, starting in 2012, MA health plan sponsors have also added additional incentives to achieve 5 stars, in the form of a quality bonus payment.3 Through a specific formula related to a health plan’s bid to CMS, a bonus payment would be commensurate with the star level achieved.

Therefore, the growing Medicare population, coupled with the increased accountability established by CMS on quality and performance, brings about a great deal of attention, resources, and strategies to improving quality. As a result of these strategies and initiatives, it becomes increasingly important for all healthcare professionals to track changes and updates to the 5-Star Quality Rating System, and understand opportunities for improvement as partners for delivering high-quality care.

Much of the pharmacy profession’s focus relates to the medication-related measures associated with the Medicare Part D ratings. On September 30, 2015, CMS released the update for the Medicare 2016 Part C & D Star Rating Technical Notes, which details the changes in measures associated with the ratings for plans during the 2016 open enrollment period.4

For 2016, there are 15 individual Part D and 32 Part C (which represents MA) measures, whereas in past years, there existed a significant opportunity for pharmacists to help impact key medication-related quality measures. However, in 2016 there were several changes to the performance thresholds for the medication-related quality measures, along with a new star rating measure targeting the completion rate for those beneficiaries eligible for a Comprehensive Medication Review (CMR). The key updates and changes to the 2016 Star Ratings as they relate to pharmacy are listed below.

For the past several years, the CMR completion rate measure developed and endorsed by the Pharmacy Quality Alliance has existed as a Display Measure. Display Measures are not part of the star ratings, but are used to help further evaluate Part D plans and monitor areas in need of quality improvement. Looking to hold Medicare plans accountable for completing CMRs and improving the current rate, CMS has now made this a star rating measure for 2016. This new measure represents a significant opportunity for pharmacists as health plans and pharmacy benefit managers reevaluate medication therapy management (MTM) strategies and channels for delivering MTM services. The average CMR completion rate for MAPD plans listed in the 2016 Star Ratings—which represents performance from 2014—is 30.9%, followed by an average rate of 15.4% for standalone PDP plans.4 The thresholds for achieving each star level for the CMR completion rate are listed in Table 1. Because performance for MAPD plans achieved an average star rating of 2.3, many health plans are in need of considerable improvement, and may explore strategies to more effectively use community pharmacies to deliver CMRs and other MTM services.

Since the star rating performance data were publicly reported in 2012, the average medication adherence rates have continued to improve across each therapeutic category for MAPD and PDP plans, as indicated in Figure 1 and Figure 2.5 The therapeutic categories include HMG-CoA reductase inhibitors (statins), renin-angiotensin system antagonists, and oral diabetes medications. 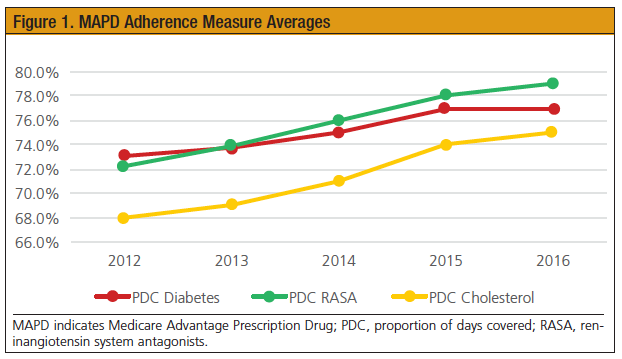 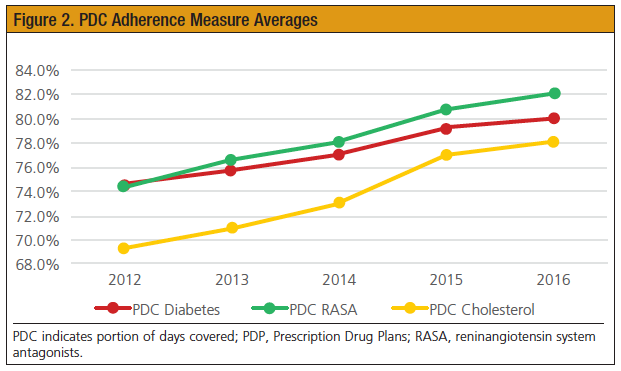 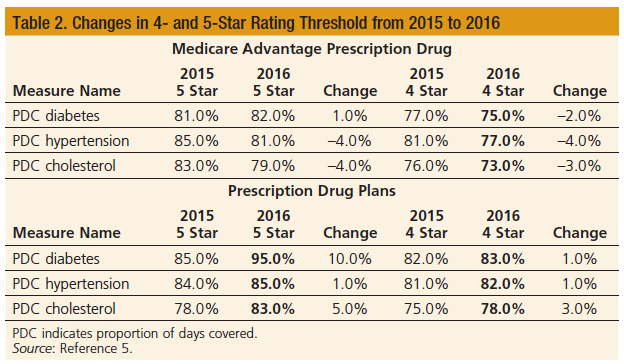 Pharmacists are well-positioned to help improve issues related to medication adherence, and improved adherence rates can be associated with pharmacy-related programs that have demonstrated success (eg, medication synchronization and automatic refill programs).

As beleaguered primary care providers face challenges with resources amidst a growing population that is gaining access to health insurance, the amount of time spent properly educating patients about new medications, or the importance of remaining on therapy, will continue to erode. For example, in a study conducted by Derjung M. Tarn, MD, PhD, Assistant Clinical Professor, Department of Family Medicine, David Geffen School of Medicine, University of California, Los Angeles, and colleagues, where the physician’s length of time discussing new medications with patients was measured, the investigators found that during an average visit of 15.9 minutes, only 23 seconds was spent discussing aspects of new medications.6 Moreover, with an average of only 2.4% of a physician’s time spent discussing new therapies, the opportunity for education and follow-up regarding medications can be more effectively executed among pharmacists—a factor health plans may look to further leverage in 2016.

High-Risk Medication Use in the Elderly

CMS is currently reevaluating this measure for 2017 and beyond, as indicated in the most recent Request for Comments.7 However, despite the uncertainty regarding the type of measure that it may become, and with the thresholds remaining relatively constant from 2015 to 2016, significant opportunities still exist for pharmacists to help ensure that elderly patients are avoiding—when possible—medications that can cause risk or harm.

Ultimately, as the population continues to age, and Medicare enrollment continues to grow at historically high rates, measuring the quality of care delivered will continue to remain a key factor for many healthcare providers. Fortunately, many of the metrics associated with measuring the quality of care provided can be positively impacted by pharmacists, which is a factor continually being recognized by health plans and prescribers. Therefore, opportunities to be included in improvement incentives, and recognition for those efforts in conjunction with other healthcare providers, have become new frontiers for the profession.

In conclusion, as performance continues to improve and goals are updated, it becomes increasingly important for pharmacists to understand where they can contribute and recognize opportunities for improvement. It is crucial for pharmacists to understand that current performance and improvement may lead to more advanced opportunities and streams of revenue for those that see 2 roads diverge, and choose to travel down the road of quality.